A Teaching Tale for Procrastination

In the 4th Century BC, it is said that in the great city of Gordium in north-west Turkey was an ox-cart tied to a post with an intricate knot, known as the Gordian Knot. 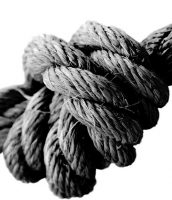 It had been prophesised that the man who could untie the knot was destined to become ruler of all Asia. Many valiant warriors had attempted the test but all had failed.

When a young man, who had just become King of Macedon after the death of his father, came to Gordium, he was determined to unravel the knot. He asked his advisors for their counsel. Many ideas were put forward such as using water to soft the knot or to pull it apart thread by thread.

The young man could not make up his mind. So he decided to sleep on it.  During the night he dreamed he was surrounded by darkness and couldn’t see a thing. Then he heard a voice, “What would the conqueror of all Asia do?”

When he awoke the next morning, he suddenly knew exactly what he had to do. He drew his sword and with one blow cut through the knot.

Ten years later, he had conquered not only Anatolia, Syria, Phoenicia, Judea, Gaza, Egypt, Bactria, and Mesopotamia but had extended the boundaries of his empire as far as Punjab, India.

Undefeated in battle, he became known as Alexander the Great.