A woman came to a hypnotherapist stating that she was suffering from insomnia and hadn’t slept for three days. 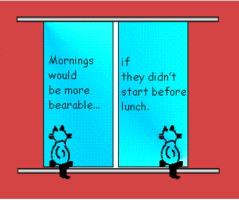 The hypnotherapist asked her what was keeping her awake.

“I’m a bit of worrier and of late I’ve been worrying about everything,” she explained.

“Everything?” the hypnotherapist replied.

“Yes, everything,” the woman confirmed. “And so, I sit up at night planning for every possible thing that could happen.”

The hypnotherapist nodded. “That’s quite impressive. So you have a plan for everything?”

“That’s right,” replied the woman proudly. “I do.”

“Well, then I can understand why you don’t have the time to sleep at night. You’re probably the best planner I’ve ever met.”

The woman smiled with delight.

“However,” continued the hypnotherapist, “I believe that there’s something you haven’t planned for.”

A look of horror came across the woman’s face. “What could I have possibly forgotten?” she cried.

“A miracle,” said the hypnotherapist, “you forgot to plan for a miracle.”