The Five Stages of Transformation

The transformation or manifestation of energy into matter and matter into energy can be classified into five general states made up of the five elements –  Fire, Earth, Metal, Water and Wood.

These stages reflect the interplay between the forces of  Yin (expansion) and Yang (contraction). 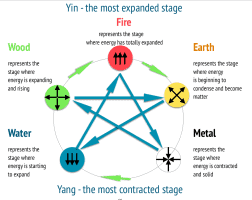 There are two cycles which manifest within the five stages of transformation.

a) The creation or nurturing cycle in which each element provides the basis and nourishment for the next element or phase.

In the diagram above. Fire nourishes Earth, Earth nourishes Metal, Metal nourishes Water, Water nourishes Wood and Wood nourishes Fire.  These relationship are indicated by the clockwise direction of the cycle.

In the diagram above: Fire controls Metal, Metal controls Woods, Wood controls Earth, Earth controls Water and Water Controls Fire. These relationships are indicated by the blue arrows of balance and control.